Yesterday I went south of the river. It was fine. I survived. It wasn’t a friday night and I wasn’t in a taxi.

It was my first craft fair held in the heritage quarter of Gravesend in the Three Daws function room. There was a gentle stream of people, mouching around – buying the odd bit; talking about this and that -mainly about how quiet town was.

Since our first book fair – we’ve been speculating to acumulate. For the first time we had a banner and a locations videoin addition to our  bookmarks. I even thought about including a sheet of reviews It drew interest. People came over; and I was able to talk about the books in terms why it had short chapters and different narrators.

I sold books: to complete strangers. Always the sign of a good day. Contacts were made for other fairs that side of the river.

Agatha Christie I may not yet be – until Symington goes viral on publication next year, that is!  (Cue Twilight Zone special effects) but I didn’t go into this book writing lark to make money. I went into it to ensure that Mark and Lucy and Symington and Emily’s stories were told, and that people read them. 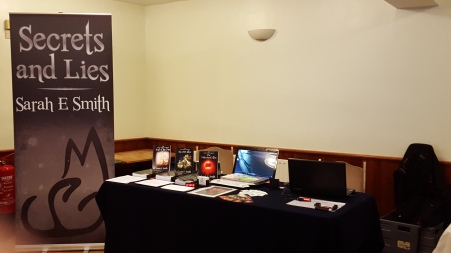