Inside Leytonstone Underground station is a series of mosaics celebrating the films of its most famous son (and one of him as a young boy outside the family shop.)  I won’t insult your intelligence by labelling them. What I will say, is that for those interested in such things, one of the films depicted in these mosaics,  gives is the title of the book Lucy is searching for! Feel free to guess… there’s no prize though! 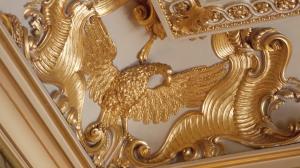