In the second instalment of The Secret of Aldwych Strand – due for publication by Kensington Gore Publications and available from Amazon in paperback and on Kindle –  Mark and Lucy realise that when Time Travel is concerned nothing is ever simple.

At the end of their first adventure the friends head home. But instead of Southend, Lucy and Mark find themselves in Nazi Britain in 1949, on a different pier, in a world that shouldn’t exist. But getting back to the present isn’t simple; the distortion at Aldwych Strand Station has shut itself down, ostensibly to protect itself from the Nazis occupiers.

Fortunately, there are rumours of a second entrance, but to find it Lucy and Mark must read Marconi’s diary which is housed in the Volk’s Palast – the former Alexandra Palace – home to the SS.

Split up (for their safety) Mark heads to Muswell Hill and the diary, while Lucy is deposited at the Leytonstone Displacement Camp.

Her job is to talk to one of Marconi’s team: a man who mapped the distortion as a lad. However, he is clinically insane and to find the answers to his riddles, Lucy must work with the camp’s commandant the enigmatic psychiatrist – and rising star in the Nazi Party – Admiral Valentin Von Schmidt.

As October turns to November, as Mark and the Prisoner of the Volks Palast witness Nazi brutality at first hand, Lucy find herself at the heart of the regime. But Mark (although he doesn’t know it) is safer. There are two people at the November 8th celebrations who want Lucy’s time travelling ability – and they will tear her apart to achieve their ends…. 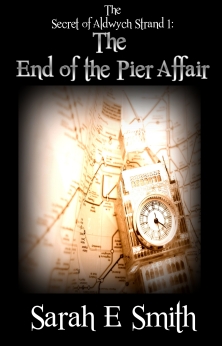